The women’s Super-Rugby Aupiki competition finally got underway last night after many Covid related delays with a nail biting and epic encounter between Chiefs Manawa and Matatū. The match went down to the wire with Matatū scoring a try in the corner after the final hooter had sounded. The conversion attempt scaped the uprights and Chiefs Manawa were rewarded with the win 17-15.

Matatū General Manager Sarah Munro welcomed the support of Andrea Rongonui and the team at Go Media as a media partner of the Hurricanes Poua, Blues and her own team, Matatū.

“It’s excellent that Go Media has come on board to sponsor three of the teams in the Super Rugby Aupiki competition, and to support these clubs’ brands across their national digital network,” comments Munro.

“Matatū represents the South Island and is the newest Super Rugby Club in New Zealand, so having the support of the Go Media team to bring our story to life is so important for our club, players and all our new fans,” Munro adds.

Go Media Director, Rongonui says: “We have always backed women’s sport across netball, cricket and football so to help usher in the professional era for women’s rugby is a real honour.

“We timed the launch of new screens in Upper Hutt and Christchurch to coincide with the launch of the Super Rugby Aupiki competition. It’s a great time for women’s sport right now and we are also proud to be the promotional partner of the ICC Women’s World Cup and after New Zealand’s win over India last night a place in the semi-finals looks likely.” 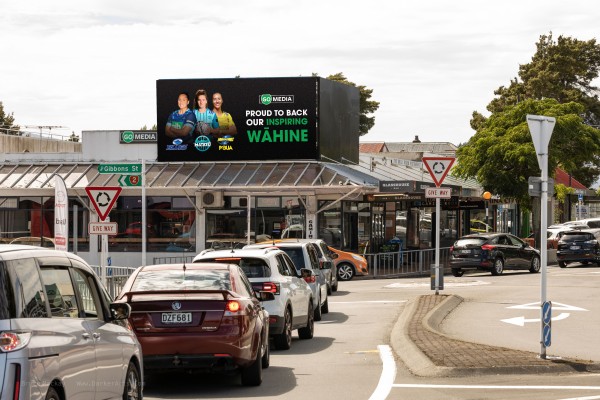 Go Media now has a national network of 68 digital screens.

Select one of our assets below to find out why we're Aotearoa's leaders in Out of Home.

Questions? Get in touch